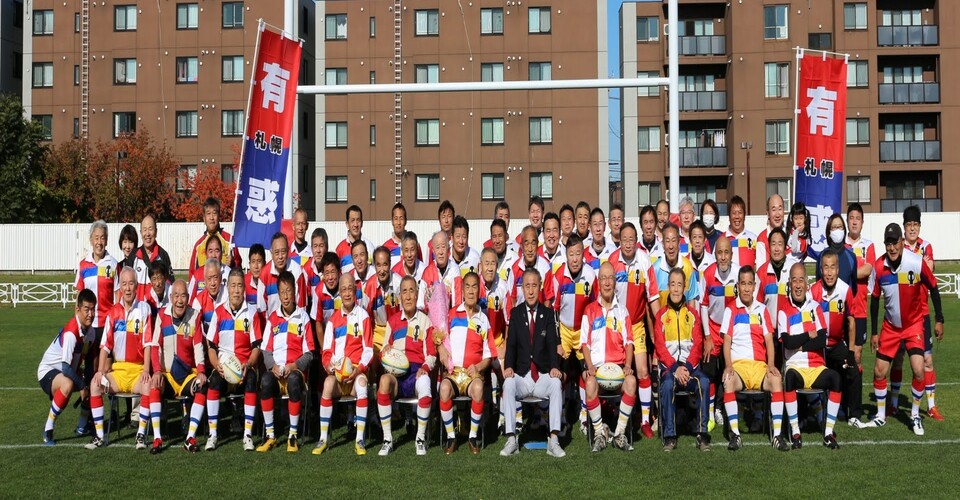 History of the Sapporo Yuwaku Club

Those who are 40 years of age or over, as of the current playing season, are eligible to join the club. Players of each age group wear shorts of the color corresponding to their age group: white (40s), dark blue (50s), red (60s), yellow (70s), and purple (80s). The design of the official uniform is the above mentioned five colors checkerboard pattern with an emblem of a brown bear skull. The uniform numbers are assigned on a permanent retired number basis. The latest one is 335, as of March, 2020.

Those under 40 years of age play as "associate members" for over 35 tournaments and the "All Hokkaido" championship tournament. They are active in this club and it is hoped they will have central roles in the future.  Supporting members also help us a lot.

At present seven generations merge and practice on Sundays with the spirit of “One for All, All for One.” The total number of team members is over 100, including an athletic trainer and assistants.

Sapporo Yuwaku Club is active as a leading club, and is an important part of the "Sapporo All-Comer Sports Club" (SASC), that plays a major role in the field of lifelong involvement in sports.

The word "Yuwaku" comes from an ancient Chinese book called "The Analects", based on the sayings and ideas of the famous Chinese philosopher, Confucius.

Confucius said:  "At fifteen my heart was set on learning, at thirty I stood firm, at forty I had no more doubts, at fifty I knew the will of heaven, at sixty my ear was obedient, at seventy I could follow my heart’s desire without overstepping the boundaries of what was right."  In Japan, we have rugby tournaments for players 40 and over.  It is called as "Fuwaku tournament".  The word "fuwaku" is written as 不惑 , which means "no doubts".  Our team’s name, "Yuwaku" is written as 有惑 , and means "we have doubts", and is a play on words.